Timor is a small island located in the southern part of Maritime Southeast Asia. It is unique in that it is divided between the sovereign states of East Timor in (you guessed it) the east as well as Indonesia to the west. Mainland Australia is less than 500km from Timor and the two are separated by the Timor Sea.

In Timor Leste, in the east, the coffee industry is positively booming. Today, we’re going to explore who produces Timor coffee, how it’s produced, and why it matters.

The History Of Timor Coffee

Just like many other islands, Timor was incorporated into trade routes for Chinese and Japanese ships during the 14th century for the exportation of slaves, sandalwood, wax, and honey.

It has been a politically divided country for many years. The Dutch since the mid-17th century claimed ownership of West Timor. East Timor was a Portuguese colony until 1975. The island was divided by a treaty in 1859.

The Portuguese introduced coffee production and cultivation to the island in the early 19th century and since then the nation has seen rapid development. As well as it remaining Timor’s only cash crop, East Timor coffee now accounts for approximately 80% of the nation’s annual exports – that’s no small number.

The majority of those living on the island rely heavily on the income earned from work within the agricultural sector. In 2003, it was estimated that approximately 200,000 people relied on coffee production and cultivation as their main income source, and this number is only growing.

For this reason, the East Timor coffee industry is having to increase the quality of production, working alongside Fair Trade and using funds provided by overseas grants.

The launch of the National Plan for the Development of the Coffee Sector 2019-2023 (PNDSC) ensures that a larger portion of the island’s production is of better quality. This would mean that the region’s roasted coffee would sell around the world for a higher price. 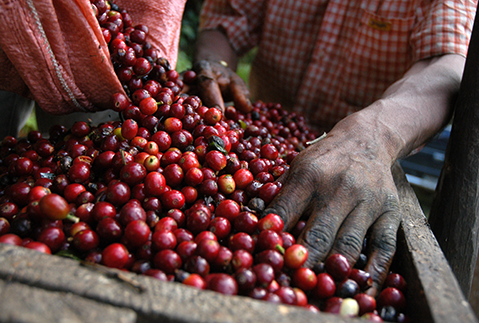 There are six primary regions of the island where coffee is grown:

The typical harvesting periods for these areas are between May and October.

Unfortunately, East Timor can’t claim to have the best conditions for the cultivation of coffee as some other countries do.

Its climate and short annual rainy season mean its lands are much too dry to support the cultivation of vegetation. The soil in many of the coffee-growing regions has naturally low fertility levels, meaning that the soil is not fit for providing the correct nutrients for the coffee to grow optimally.

The methods for the cultivation of Timor coffee remain quite basic throughout the region. The small plantations with coffee cherries are often unmanaged with little attention paid to pest and disease management.

But an unintentional upside to this is that many of the country’s coffees are (uncertified) organic coffee. They are technically organic due to the lack of pesticide use. These preventative chemicals have never been used on the island and they’re not going to be introduced now.

Throughout the coffee harvest period, producers will hire friends and family members to maximize the efficiency of their production.

However, many of the coffee producers claim that they do not own the lands that they work on. They work on land that has been abandoned by former estates. The state, more often than not, believes it is best to turn a blind eye to this due to the economic benefits that coffee production brings.

Timor’s hybrid was discovered in 1927 in a plantation cultivating the typica bean (an arabica variety). This unique coffee is the result of a spontaneous cross between arabica and robusta coffees.

What makes Hibrido de Timor unique is that it takes the best quality from each of its parent varietals and combines them.

Arabica, known the world over for its delicious taste, being the source of many a specialty coffee as well as accounting for more than 60% of all global coffee production is sadly also very susceptible to diseases such as coffee leaf rust.

On the flip side, while a robusta bean may not be of the same quality as arabica, it can boast that it is resistant to many diseases. So, Hibrido de Timor – being a very resourceful plant – has a quality closer to that of arabica, but can also brag about its resistance to an impressive amount of coffee diseases.

Unfortunately, not enough research has been done on this unique coffee. Due to climate change, the need for producers and farmers to have a disease-resistant plant is high – the genetic resources from this hybrid may hold the answer to bypassing these destructive diseases in the future.

The Future Of Timor Leste Coffee

The region’s coffee remains the world’s largest single source organic coffee producer, despite their coffee production accounting for less than 0.2% of the global coffee trade.

The cup quality of the coffee in this region is not just a combination of both parent varietals. Since the coffee can grow in much less fertile soil due to its robustness, the blend loses some of its quality. However, the roasted coffee is nevertheless packed and sold as a unique, premium product supported by Fair Trade.

It has yet to reach the standards of the specialty coffee found around the world. Producers are working hard to ensure that the country’s growing interest in instant coffee is quashed and that local and overseas coffee aficionados wake up to their morning cup of the organic, Fair Trade coffee East Timor is making its name with.

Brikka vs. Moka: Which Produces The Best Espresso?

How to Filter Cold Brew Coffee