Some at-home baristas prefer to be a little more involved and experimental in their brewing than even a semi-automatic espresso machine will allow. If that’s you, manual brewing is probably right up your alley.

Two of the most popular manual brewing tools are the Chemex and the Aeropress, so stay tuned for a full breakdown of each and some hints on which one might be best for your lifestyle.

With almost any form of manual brewing there are a few key advantages across the board. One of the most noted of these is the at-home barista’a ability to customize the brew. Whether its timing, grind size, or beans, there’s plenty of room for experimentation.

Additionally, manual brewing tools are typically much cheaper than espresso machines or other semi or fully-automated devices. Thus, you can actually purchase both the Chemex and the Aeropress for under $100. However, you may need to buy a scale or grinder depending on what exactly you want to do with your new coffee companion. 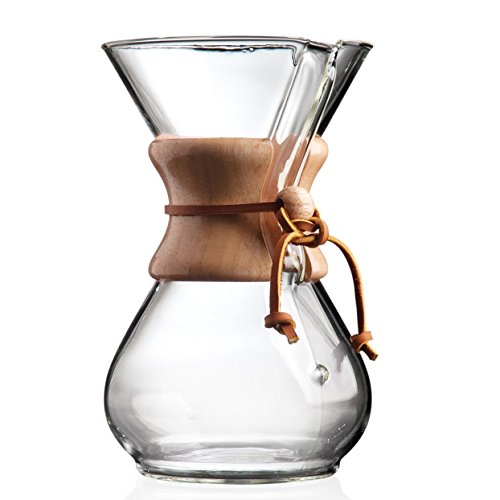 Chemex Pour-Over Glass Coffeemaker - Classic Series - 6-Cup - Exclusive Packaging
Check Price on Amazon If you click this link and make a purchase, we earn a commission at no additional cost to you. Last Update: 2022-08-13
Pour over brewing developed shortly after Auguste Melitta Bentz developed the first paper coffee filter from her son’s blotting paper. Since then, both the paper filter and the brewing method have become wildly popular in the coffee community.
Like Free Coffee? Get your first bag free with an Atlas Coffee World Tour Click here to get the deal

Chemex is a unique, hourglass shaped pour-over drip brew tool invented by Peter Schlumbohm in 1941. It has two main models, one entirely made of borosilicate glass with a handle and the other without an handle and with wood and leather detailing.

To use it, you have to carefully measure the components, bloom the grounds, and pour the heated water. It may sounds pretty simply, but the process does require a bit of finesse. You can read more on the technique here.

The resulting brew has a very clean taste and feel, thanks to the thicker-than-usual paper filter and slow extraction. So if you have a coffee with more delicate citrus or floral notes, this tool can really help you make the most of your beans. 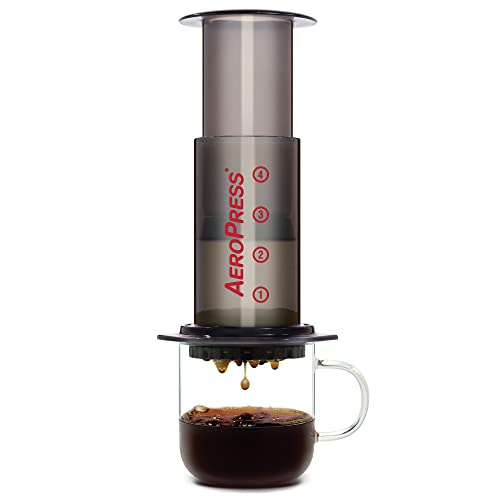 AeroPress Original Coffee & Espresso Maker - Quickly makes delicious coffee without bitterness - 1 to 3 cups per pressing
Check Price on Amazon If you click this link and make a purchase, we earn a commission at no additional cost to you. Last Update: 2022-08-13
Aeropress came onto the coffee scene later than Chemex. Alan Alder developed its efficient design in 2005. Since then, this pressure-based brewing tool has been a fan favorite for travelers and homebodies alike.

Aeropress is a syringe-like, plastic brewing tool. It includes a plunger, housing, plastic filter and paper filters. The plastic makes it a fan favorite for camping since it’s difficult to break, and some buying options even include a travel pouch.

Using an Aeropress is pretty straight forward. You simply wet the paper filter and place it in the plastic one, assemble that and the housing, place it over your cup, put in your grounds, pour in some heater water, insert the plunger and press down slowly. The whole process takes less than 3 minutes, depending on how long you want to steep your grounds. Read more on the Aeropress techniques here.

By varying this technique you can produce a wide range of coffee from something resembling espresso to more French-press style brews.

Unlike the subtler drip method of the pour-over Chemex, the pressure-brewing of the Aeropress lends the final brew a more espresso-like boldness. While it is not quite as crisp and rich as the Chemex brews, it is much stronger and still quite clean.

The Aeropress wins this category, not because the Chemex is especially involved, simply because this tool is incredibly simple.

The Chemex brewing process is much more involved because you need to bloom the grounds and pour the water in a specific manner. While some at-home baristas appreciate the artistry of this process, others find it tedious. However, in the grand scheme of coffee brewing, it still isn’t too hard to manage.

The Aeropress does have one ease of use downside: it can get messy. If you use this tool correctly there is virtually no clean-up required. However, no one is perfect. If you press too hard or aren’t pushing straight down on the plunger, there’s a chance you could spill coffee and hot water everywhere.

Each of these methods have their own pros and cons as far as versatility goes. With the Aeropress you can use a variety of different brew methods, such as the inverted method, to get different brewing results. There’s even a World AeroPress Championship where people compete to see whose method is the best.

On the other hand, while the Chemex doesn’t offer a lot of variation in the method you use to brew, you can make cold brews with it, unlike with the Aeropress.

One of the biggest advantages of the Chemex is that is comes in several different sizes: 3, 6, 8, and 10 cups. On the other hand, the Aeropress only comes in one size, which only allows you to brew up to 4 cups at a time.

So if you have multiple coffee drinkers in the house or you frequently have caffeine-obsessed guests, this is probably a factor you should be considering.

If you’re looking for a clean brew, either of these options should work well for you. The Aeropress is a great choice for people on the move who are looking for something durable and portable. Chemex is better suited for stationary uses within your kitchen, such as cold brews.

For a stronger, espresso-like flavor, go for the Aeropress. Or, for a richer flavors with more intricate notes, try a Chemex. Budget permitting, you may even be able to get both!

What Is Piccolo Coffee?

Starbucks Sauce vs. Syrup: Adding To Your Coffee Experience