When you hear the word “caffeine,” coffee is probably the first thing that comes to mind. And the correlation makes sense since so many rely on the popular beverage for a morning (or mid-afternoon) energy boost.

Though your daily cup of coffee boasts a few milligrams of the stimulant, it’s not the only drink around that can deliver your much-needed caffeine dose. Energy drinks, soft drinks, and various types of tea also contain caffeine. Having such a wide range of caffeinated beverages makes perfect sense, as 80 percent of the population drinks one of them daily. But despite the many options for caffeinated beverages that exist, we’ll only be comparing tea and coffee in this article.

We’ll address how their caffeine levels compare, whether one of the brewed beverages is better for you than the other, the negative and positive health effects of caffeine, and more, but remember, we’re not doctors — just people who really like coffee — so our word shouldn’t be a replacement for medical advice; if you want to know how you should handle your caffeine consumption and how many milligrams per day it’s safe for you to drink, talk to one of your local medical professionals.

Now, without further ado, let’s get on with the tea vs. coffee caffeine showdown!

How Much Caffeine In Coffee vs. Tea?

When comparing the caffeine content found in coffee beans versus tea leaves, the former contains more, but a cup of coffee usually has more caffeine than a cup of tea.

This is because the amount of caffeine in each type of drink depends on both the preparation method and brewing time. A cup of coffee is more concentrated than a cup of tea since we typically use less than five grams of tea leaves per cup compared to the ten or more grams of coffee grounds needed for a cup of joe.

Brewing temperature also plays a role in a drink’s caffeine content. Since coffee is typically brewed at a higher temperature than tea (around 195 to 205 degrees Fahrenheit), its caffeine levels will be higher. 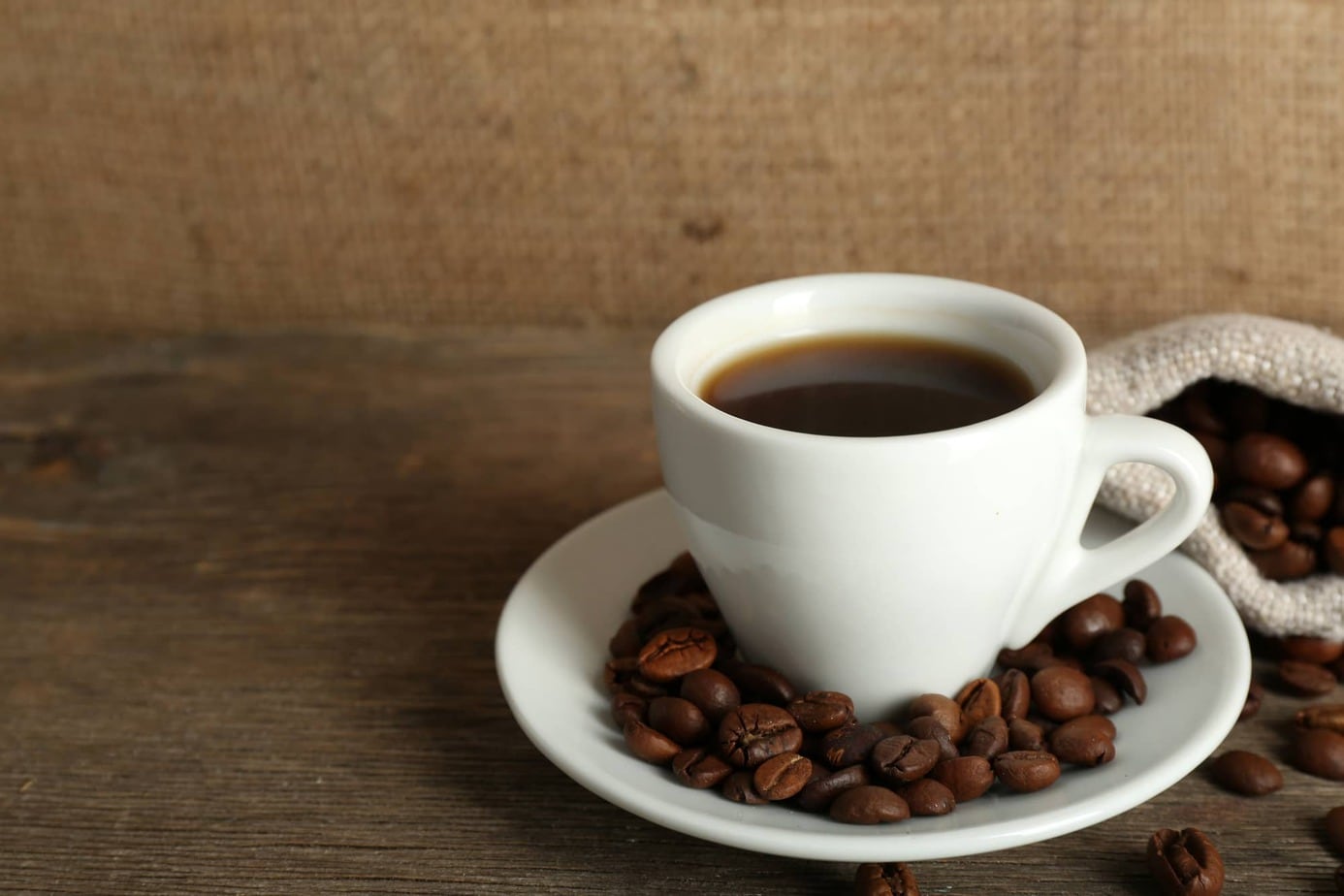 Let’s take a closer look at the caffeine levels of your favorite types of coffee, so you’ll know which drink to reach for when you’re groggy on a Monday morning.

Both the brewing time and the preparation method impact how much caffeine is in your cup. This is why the caffeine levels in different coffee beverages differ.

An eight-ounce cup of brewed coffee, on average, contains 85 milligrams of caffeine, while an espresso contains around 60 milligrams per single shot. A double shot is considered a standard serving at most coffee shops, which means beverages like lattes or cappuccinos commonly contain 120 grams of caffeine per cup.

Strikingly, a cup of cold brew (which is different from an iced coffee because it is prepared at room temperature and steeped for around eight to 12 hours) can average around 150 to 230 milligrams per cup. A few sips of this chilled coffee beverage will heighten your energy levels for sure! 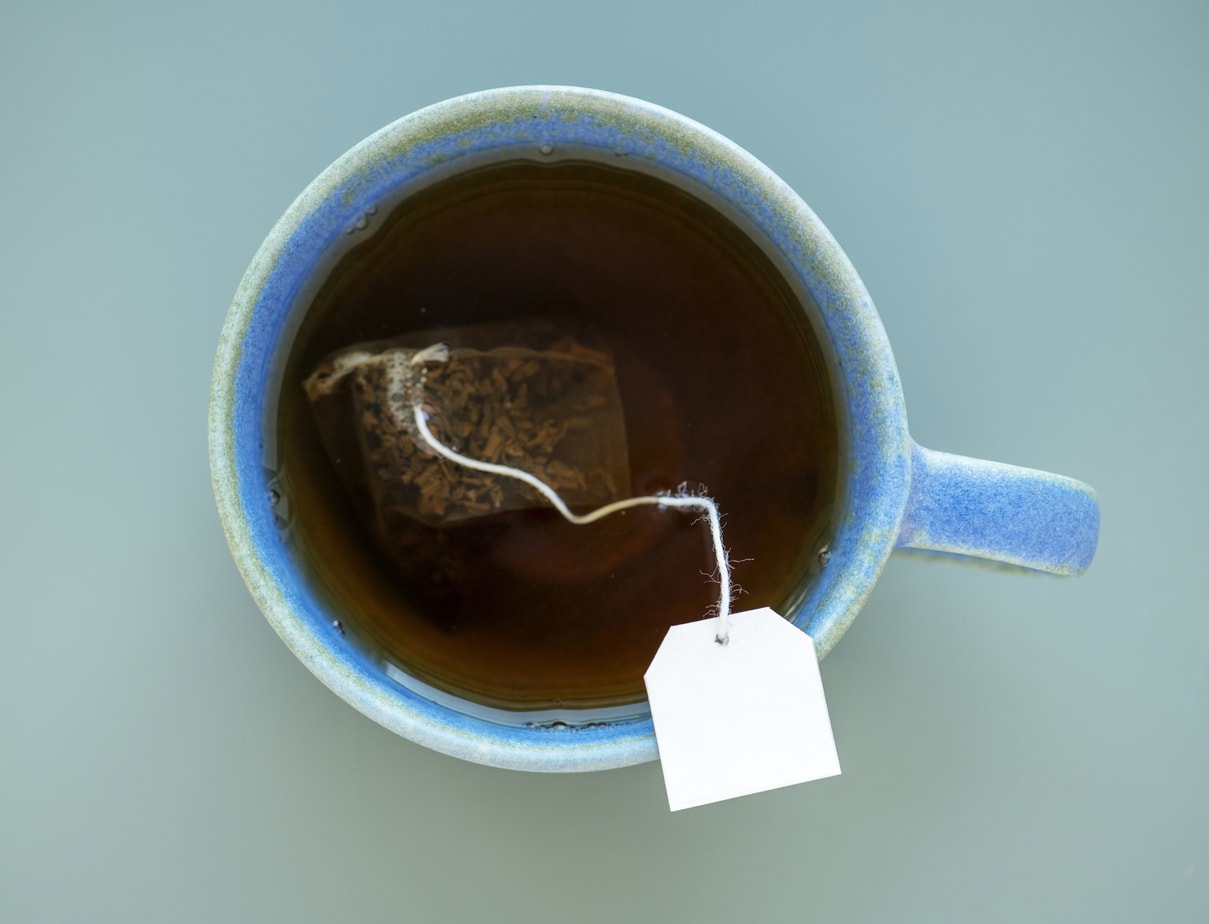 Even though black, white, and green tea all come from the leaves of the same plant, the time of harvest and the oxidation sets them apart. So does the steeping time, which influences the amount of caffeine each drink will have.

While black tea is brewed with boiling water and steeped for the longest time, it also contains the highest amount of caffeine — around 45 to 60 milligrams per cup — which is comparable to a single shot of espresso.

A cup of green tea only delivers around 20 to 45 milligrams of caffeine per cup, and white tea averages around six to 60. Both of these teas are brewed for a shorter time (only three minutes) with water that’s a lower temperature.

If you want another option for low-caffeine tea, opt for an herbal tea, like peppermint, chamomile, or rooibos, as they’re basically caffeine-free. 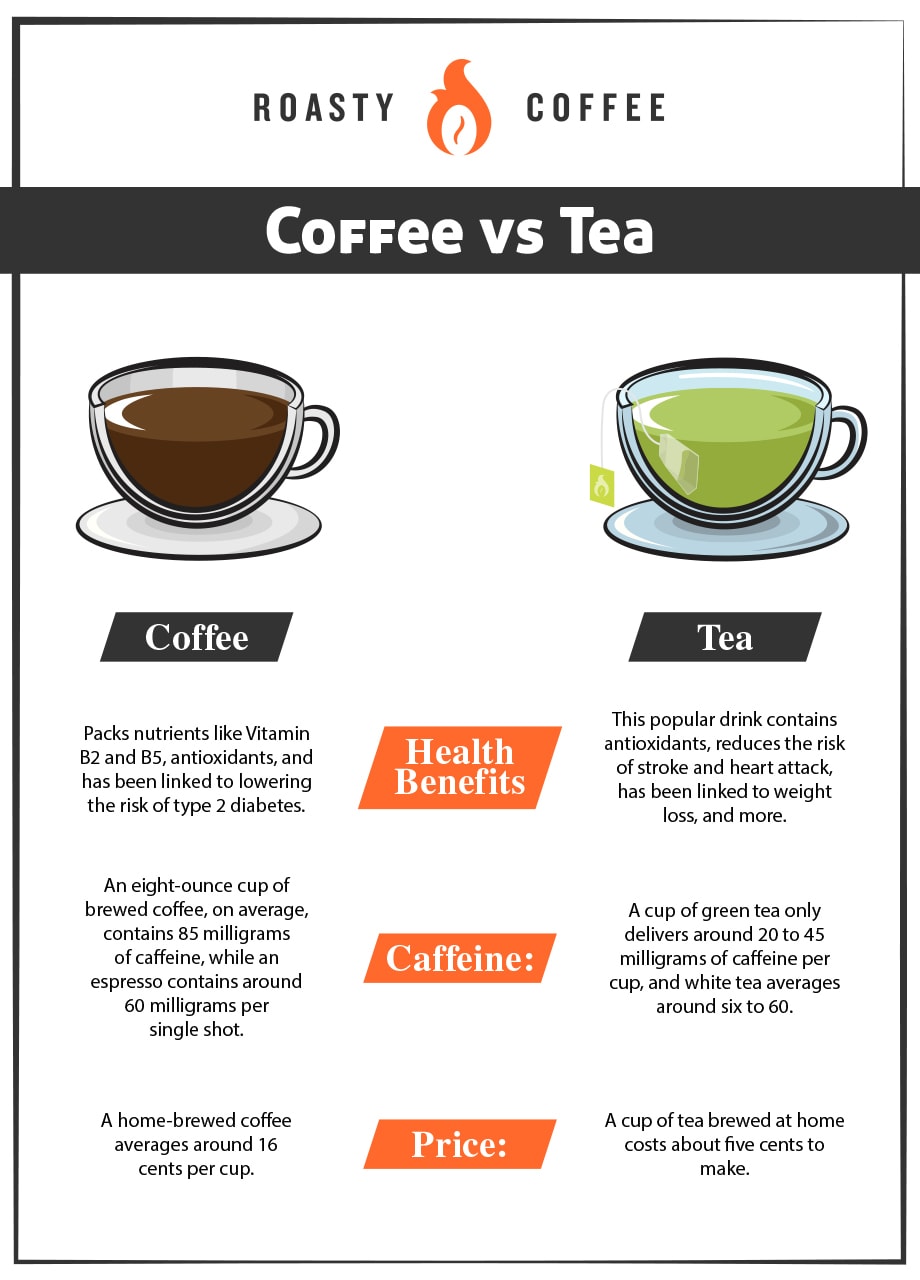 Which One Is Better For You?

As we’ve explained above, the caffeine hit for both coffee and tea depends on the type of each respective drink you’ve chosen. Just be sure to monitor your intake of whatever you choose to pour into your cup; if you’re a healthy adult, you shouldn’t exceed 400 milligrams of caffeine daily.

While the effects of caffeine can linger for hours, some people stop experiencing any side effects from it, positive or negative, much more quickly. Because everyone is different, you should adjust your caffeine intake according to how your body responds.

Monitoring your caffeine intake is important because excessive amounts of the stuff present health risks and other adverse effects like anxiety, restlessness, and disturbed sleep. (Pro-tip: A good rule of thumb for avoiding a disrupted sleep schedule is to avoid drinking caffeine four to six hours before bed.)

Pregnant women, people with a heart condition or cardiovascular disease, and those prone to migraines should be especially careful with caffeine. If you fall into one of those categories, your safest options are to pour a cup of low-caffeine tea or take advantage of all your favorite coffee companies’ decaffeinated coffee beans.

Don’t forget that coffee and tea aren’t the only caffeine-filled beverages on the market: soft drinks, energy beverages, and certain types of food can contain significant amounts of caffeine, plus added sugar, so you should monitor your intake of those as well.

While caffeine often gets a bad rap, we’d be remiss to exclude its array of nutritional benefits. It can boost athletic performance, lift your mood and help you burn more fat.

And because we at Roasty naturally want you to join Team Joe, we’ll share the benefits of coffee as well: it packs nutrients like Vitamin B2 and B5, antioxidants, and has been linked to lowering the risk of type 2 diabetes.

A Harvard study even concluded that women who drink four cups of coffee per day were at a lower risk of depression — they were 20 percent less likely, to be exact. We’ve said it for years but now have the science to back it up: regular coffee consumption makes you happy!

The benefits of tea are pretty impressive, too. There’s lots of research that proves how wonderful a cup of tea can be, as the popular drink contains antioxidants, reduces the risk of stroke and heart attack, has been linked to weight loss, and more. As much as we love coffee, we’ve got to give credit where it’s due: all of its positive effects make tea a super drink for sure!

Which one should you choose in the morning?

Whether you choose to become a tea or coffee drinker depends on a few things, the first being the most obvious: which drink suits your personal taste? We wholeheartedly believe everyone should be a coffee lover, but we also understand that not everyone enjoys it as much as we do. So, if you’re not the biggest fan of joe but still want to enjoy a hot beverage in the morning, consider joining the ranks of tea drinkers everywhere and brew a mug of Earl Grey or English breakfast tea. Likewise, if you aren’t big on tea, you may want to get yourself a bag of dark-roasted coffee beans and get to brewing.

Your choice of hot drinks also, of course, depends on how much caffeine you want to consume. We already broke down the differences between caffeine levels in the two drinks above, so you now know different types of coffee and tea have varying amounts of caffeine, which should play a role in your decision.

Which has a longer history?

While both of these amazing drinks have been around since the beginning of time (okay, maybe not quite that long, but still, they’ve both been around for a while), when you’re comparing the histories of tea and coffee, the leaf-based beverage wins by a long shot.

According to legend, tea has been consumed since 2732 B.C., but coffee, on the other hand, wasn’t said to be roasted, ground, and sipped until around 1000 A.D.

What is more expensive?

Despite being the more popular drink in America, coffee is the more expensive of the two. According to PBFY, a cup of tea brewed at home costs about five cents to make, while home-brewed coffee averages around 16 cents per cup.

Don’t expect things to be different at the local café, either — if you’re a coffee person you can generally expect to pay more than your tea-loving friend did for a drink of the same size.

How acidic is tea compared to coffee?

Studies have proven that tea is usually less acidic than coffee as determined by the pH scale. This is only a general statement, though, and the acidity levels depend on the type of tea or coffee you’re comparing.

Should you drink either of these when you’re sick with a cough or cold?

Downing a few cups of tea when you’re fighting a cold is always a great idea, as the hot drink works wonders in breaking up congestion and soothing a sore, achy throat. Green, herbal, or fruity teas, like those packed with lemon flavors, for example, are a sick man’s best friend, thanks to their nutritional benefits.

Coffee, however, isn’t recommended for those who are ill. While its caffeine content can fight fatigue by boosting your energy levels, a cup of coffee can also act as a diuretic, drawing fluid out of your body. You might be tempted to stay on your regular drink schedule and start your day with the same piping hot mug of home-brewed coffee like you always do. However, it’s probably best to skip your daily cups of coffee and sip another type of drink, like water, tea, fruit juice, or a sports drink until you feel better.

Coffee and tea dehydrate us.

The caffeine in both beverages can act as a diuretic, causing you to lose fluid. So, it makes sense to assume that you could become dehydrated if you consume enough coffee or tea. If consumed in moderation, however, the caffeine in a cup of your favorite hot beverage isn’t enough to dehydrate you.

The truth is, losing enough fluid to dehydrate you would require you to drink more than just your daily cup of caffeine. In fact, you’d have to drink more caffeine-filled cups per day than even the biggest tea or coffee lovers can handle.

But lowering blood pressure isn’t all catechins can do for the human body; other potential benefits of the naturally occurring antioxidants include infection prevention and lowering the risk of arthritis, cancer, diabetes, and heart disease.

So, if you’re among the population of regular tea drinkers who are concerned about blood pressure, make sure you’re brewing tea that’s high in catechins, preferably one that’s green or white.

Your taste buds will be pretty happy with whichever of these beverages you choose to get your day started on the right foot (but we really hope it’s coffee you decide to pour in your cup); just be sure you’re enjoying it in moderation to spare yourself from the adverse effects of too much caffeine.

Remember, though, that the amount of caffeine in your cup varies significantly based on the type of each beverage plus the brewing method, water temperature, and steeping time. And, if you’re sensitive to caffeine, pregnant, or have a heart condition, be especially careful of how much of it you’re consuming, whether through coffee or tea.

Coffee Cough: Is Your Caffeine Addiction Causing This?

Chemex VS. V60: Which Brewer Is Better?

How to Choose the Best Water for Coffee