Even if you are an avid coffee drinker, there is a solid chance you have not yet come across Venezuelan coffee. Stay tuned! We’ll explain why that is and the reason behind these beans’ conspicuous absence from the global coffee market. 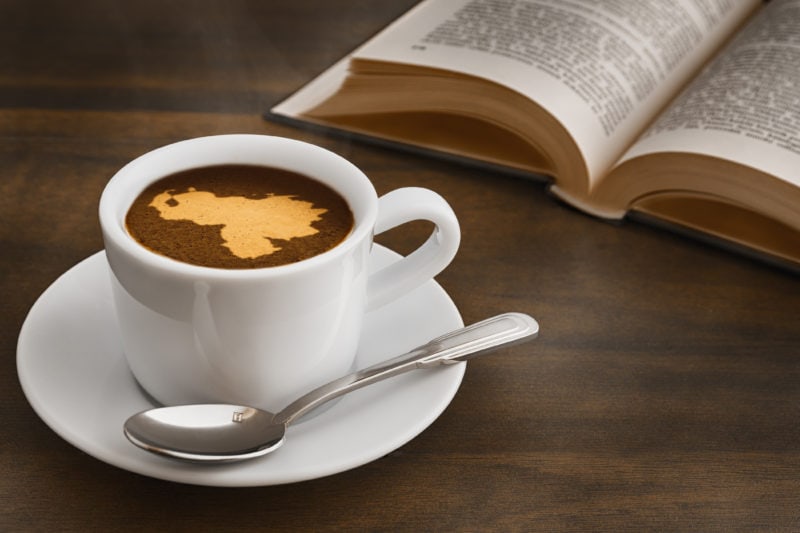 It may surprise you to learn that Venezuela once gave Columbia a run for its money terms of coffee production. Now the country barely produces 1% of the world’s coffee. And most of that is consumed domestically.

In 1732, a Spanish missionary introduced coffee to the region. Due to the high demand for coffee alongside the low cost of labor and land after colonialization. However, the decline of slavery and the war for independence in Venezuela benefitted the coffee industry, which continued to grow well into the 1900s.

The industry started to decline in 2003 with the rise of Hugo Chávez, who chose to nationalize the country’s larger roasters and instituting price controls. This was partially due to a push to make was for the growing oil industry in the country, which had begun in the late 1900s. As a result, many farmers were forced to leave the coffee industry behind. The only groups spared were those labeled as artisanal or specialty producers.

However, more recently Nicholas Maduro opted to ban Venezuelan exports, damaging what remained of the high-quality coffee production in the country. Many artisanal producers have turned to padding their products with non-coffee fillers to reduce prices or even illegal sales in Columbia.

What Makes it Special?

While there are several areas where coffees have grown across Venezuela, the most notable are the Maracaibos coffees. The name comes from the Maracaibo port through which they used to ship. This area is located near the Andes mountain ranges, whose altitudes allow for the growth of a number of arabica varietals.

The classic Venezuela coffee flavor is deeply sweet with notably balanced acidity. The latter component is the one most often mimicked by other brands aiming to “capture” and bring the taste of Venezuela to the global market.

Clearly, Venezuela has a complex coffee history. Over time, the culture associated with this caffeinated beverage has grown roots in communities across the country. Historically, Cafe Guayoyo has been the most prominent brewing method for Venezuelans.

Similar to the Costa Rican Chorreador style brew, Guayoyo is a coffee sock brewing method. Preparing your morning or afternoon cup with a “sock” mechanism might not initially sound like a good idea. But, it is quite effective and popular in many different regions. (Plus, it doesn’t actually use any real socks.)

If you were to watch someone prepare Cafe Guayoyo, you may notice the process looks similar to using a Pour-Over. Except, instead of the fancy ceramics, you just need the stand and a fabric filter. The ratio of water to grounds also sticks to most norms, with less than 80 grams per liter of water, though preferences do vary.

Specialty Coffee on the Rise?

Venezuela doesn’t seem to be a major part of global coffee culture in terms of trade. But, that does not mean they are not picking up on the rising popularity of specialty coffee. Espresso drinks have not been a major player in the past, due to the high price of equipment. In Venezuela, prices for many goods have increased dramatically over the last several years. These price increases make many products inaccessible for both home and commercial brewers.

However, the drive and ingenuity of many entrepreneurs continue to influence the development and evolution of Venezuelan coffee culture. Despite the numerous challenges posed by the political and socio-economic climate of the country, the popularity and availability of specialty drinks continue to grow.

Over time, Venezuela has gone from one of the biggest coffee exporters in the world to complete absence from the world coffee market. After a number of government mandates, they exported less and less each year. There have been no documented coffee exports from Venezuela since 2016. Even by then, the country was exporting less coffee than it was importing.

Can I buy Venezuelan Coffee?

As you may have guessed, it is nearly impossible to get your hands on Venezuelan coffee, especially across North America and Europe. If you come across some Venezuelan coffees, chances are they are “inspired by” Venezuela coffee processes. For instance, they may utilize similar washing, roasting, or growing techniques to mimic the flavor.

Puroast, for example, is a brand whose practices were inspired by the owner’s experience on a Venezuala coffee farm. However, they source their beans from other areas in Central and South America (Peru, Colombia, Honduras, Guatemala, Mexico, and Nicaragua).

Thus, the chances of getting your hands on coffee that comes from Venezuela are pretty slim, unless you are a local. Even then, nabbing some of the artisanal brews that used to be the country’s pride and joy might prove difficult.

Hopefully, in the future, Venezuela will be able to rebuild the industry and infrastructure that once allowed them to share their coffee with caffeine enthusiasts across the world. Until then…

Nespresso VertuoLine vs Original: The Crema of the Crop

Starbucks Sauce vs. Syrup: Adding To Your Coffee Experience